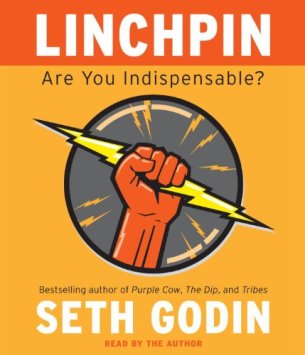 Linchpin, by Seth Godin, describes how the old model of factories hiring replaceable minions is fading away and a new era that rewards creativity and individuality is on the horizon. He encourages his readers to be indispensable to the company and generous with their gifts instead of just looking out for number one. I think this sort of philosophy is particularly applicable to those working in animation: only thinking about yourself and what you can get out of a situation will not lead to good results, and the real standouts in the industry are the ones who are more concerned with making a great film than with their own greed / ego.

If I had a criticism with the book, it might be that its definition of the word “artist” was too broad for me. The book’s argument was that being an artist isn’t just restricted to being a painter or musician, and that a founder of a shoe company or a waitress could also be an artist by going above and beyond in their work. I don’t want to sound like an elitist here, but I think when you cast the net that wide, the term loses some of its meaning.

Is Jonathan Ive, the designer of the iPod, really an artist? He came up with a clear, readable design that makes it easy to find your music and play it, so he clearly did his job well. But there’s nothing aesthetically interesting about the iPod on its own, and when a newer media player becomes the norm sometime in the future, the iPod will probably be forgotten except as a piece of nostalgia for a particular era (the same way cassette tapes are a source of nostalgia for the ‘80s and ‘90s). That’s certainly not true of Beethoven, Shakespeare or Picasso, whose works will always be art no matter how many further advancements are made in their respective fields. Plus, I think the iPod fails to pass muster as a work of art even on Godin’s terms that art is anything “creative, passionate and personal”. When I look at an iPod, “sleek”, “dispassionate” and “impersonal” are words that spring to mind. It could maybe be argued that the iPod was creative, given that its sparseness probably went against conventional beliefs about how such products should be designed, but it’s hardly a work of incredible imagination.

Again, that’s not a bad thing – an iPod’s purpose is to play music (i.e. the art of other people), not to be a fascinating work of art in itself. If the iPod was as visually compelling and thematically interesting as, say, Picasso’s Guernica, then it would distract from its reason for existence. So, yes, the iPod is a top-notch product, but I don’t think it’s art. A customer service rep who goes out of his way to please the customer is a great thing, to be sure, but I don’t think it’s an insult to say that person doesn’t belong in the company of John Lennon and Walt Disney. And the founder of Zappos might be thinking outside of the box when it comes to selling shoes, but ultimately he’s just a guy who found a marketing strategy that works, no different than the “anonymous corporate hacks” (to use Godin’s term) who write Top 40 pop songs. People like Thomas Edison and Louis Pasteur aren’t traditionally thought of as artists and, as far as I know, they never thought of themselves as artists, either. They were geniuses in their fields, but that’s different than being an artist. Godin says that “the medium doesn’t matter. The intent does”. But if that’s true, then shouldn’t it matter that Charlie Chaplin and Paul Klee intended to make great art, while even the best FedEx employees probably don’t have any such intentions?

The reason I have a problem with this is that it blurs the lines of what qualifies as art and then we suddenly need a new term to distinguish between great Apple employees and people who actually create works of aesthetic significance. There’s certainly no law that a shoe or a computer couldn’t be made into art (Marcel Duchamp turned a urinal into an artistic statement, after all), but it would have to rise above its functional purpose and I don’t see that happening at the companies that mass-produce such things, even the ones with a veneer of “creativity” like Apple and Zappos.

I know this all sounds kind of snobbish, and I really don’t mean it to, but in a way I feel like Godin’s definition is even more snobbish. He’s basically saying that people who think creatively and look for new ways of doing things are artists, and non-artists have no initiative and just copy things other people have done. In other words, anyone who isn’t an artist is wasting his life and is going the way of the dinosaur. I don’t think being an artist makes you better than anyone else, it just makes you different. I can draw funny pictures, but I could never fix a sink, and I’m sure glad people in the latter category exist.